Gathering up speed winding down Sir Robert's Wharf road, the cyclist plunges head long into the crystal clear waters of the wharf channel. Only for the fit and slightly mad. Photos by Keith and Sue Vials. 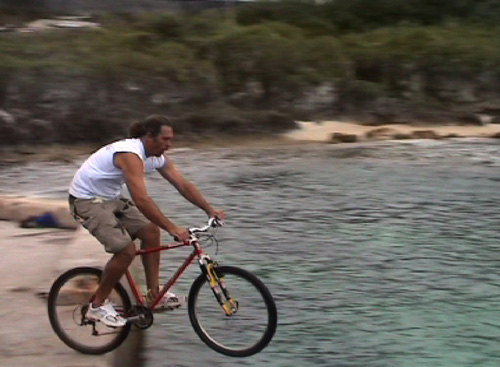 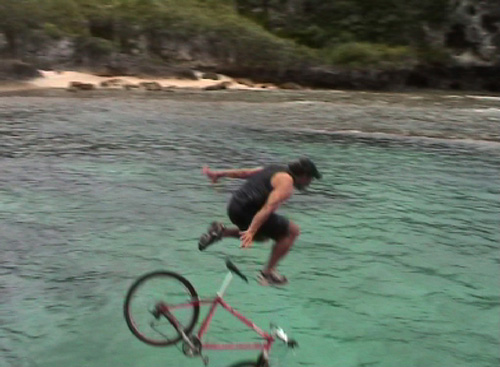 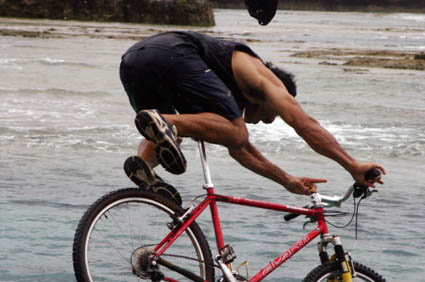 When life has got you on the run and all seems hopeless, revert to your natural hermit crab state. The Birgus Latro treatment works on the cerebral chemical receptors re-channaling the brain's natural electricit 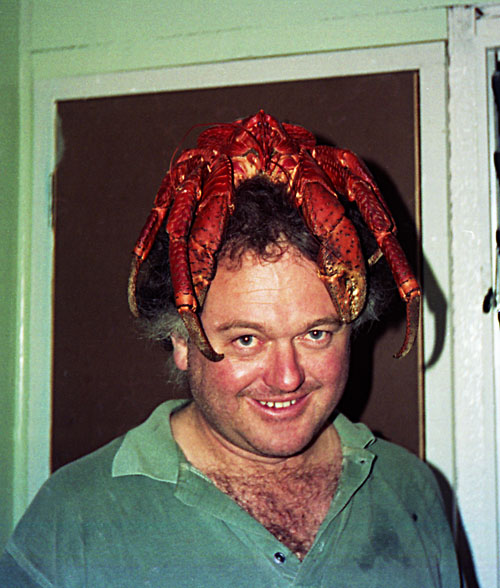 Once a lost tradition, the anxiety of Niue youth faced by 19th century stasis is expressed in flamboyant manifestations of expressive headwear 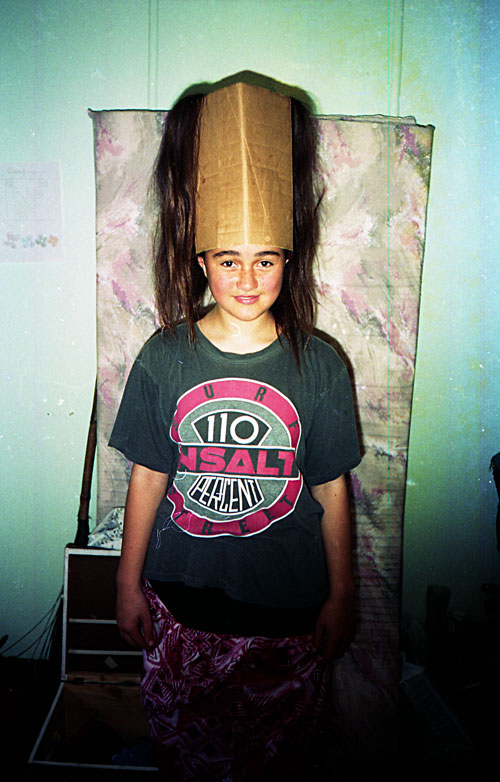 When suffering from plagues of insects, an environmentally friendly method of irradication albeit anthropocentric, is to plug in and turn on a good strong vacuum cleaner and apply the nozzle to the affected area. 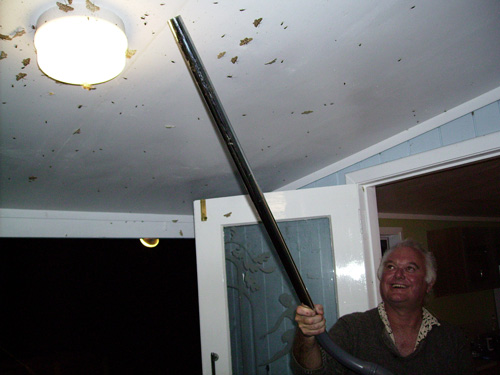 On much of Niue's coast particularly  on the East coast there is a reef formation called afati which is on average about 2 metres above sea level. Inside this terrace reef are deep pools fed by the constant wash from the surge pounding its seaward face. These pools are teeming with sea life despite being above sea level. A fun activity here is to sit in these pools and allow tonnes of water plunge down upon you dunking you under the crystal clear water . A safe activity in a moderate to large swell. 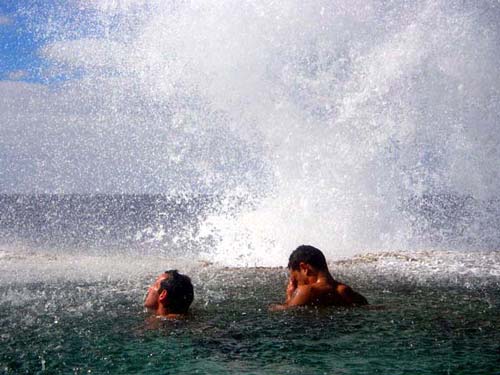 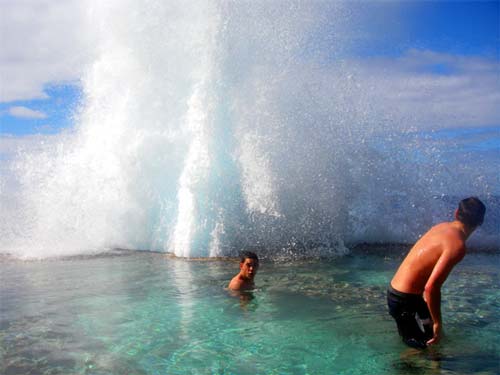 On the Eastern point of Niue there is a massive blowhole that sends spray tens of metres in the air. The force coming from a two by one metre hole is extreme and to get amongst it is thrilling but dangerous if you get too close. The spray from this blowhole has created a  hundred metre radius rock desert in which some particularly enchanting glades sit amongst the rocky landscape. 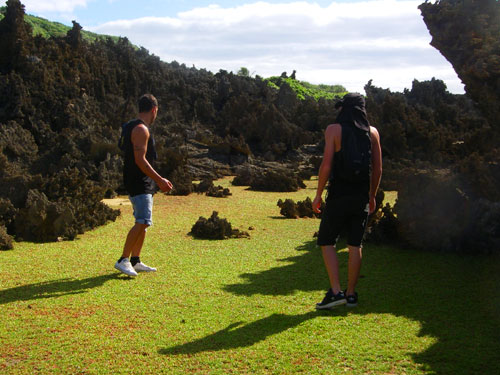 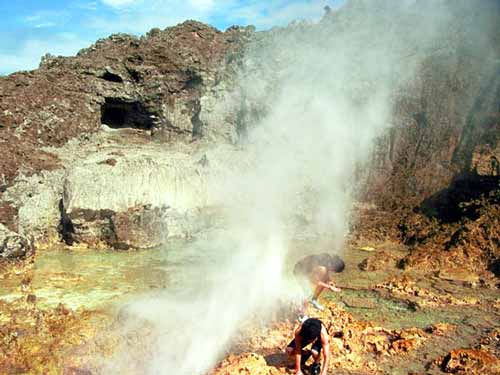 The object of this extreme sport is to wait for the last minute for the wave to break over the lip of the wharf and out run it so it does not over take you before you reach the road leading up to Alofi on Niue's West Coast. The risk of drowning depends on the size of the waves. This sport can only be practiced on rare occasions between November and April, however at the canoe landing at Liku on the East Coast, Wave Running can be practiced more often, year round, on the 30 metre wide reef. However the escape route at this location is a narrow flight of stairs running up through a cave. If this is not negotiated accurately the Runner can be rammed into the cliff face on either side of the cave and then dragged out to sea. Good shoes recommended. 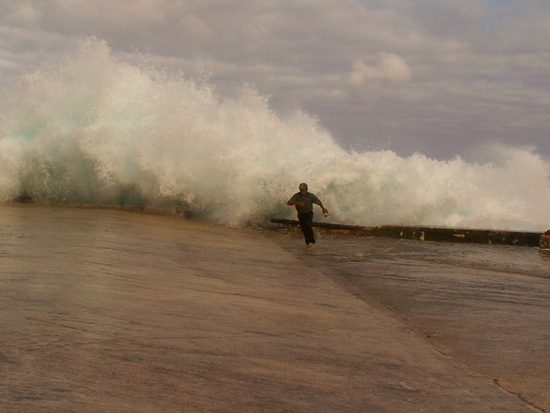 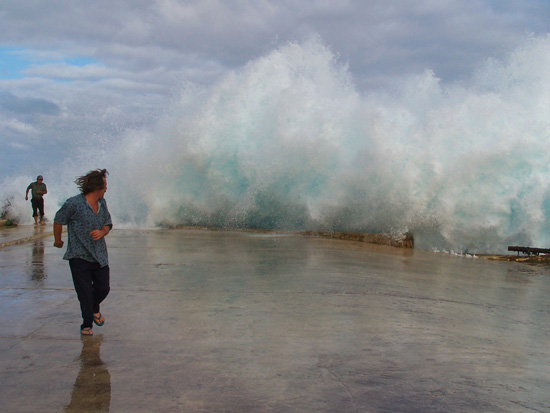 This is an activity where the participant sits on a rock. 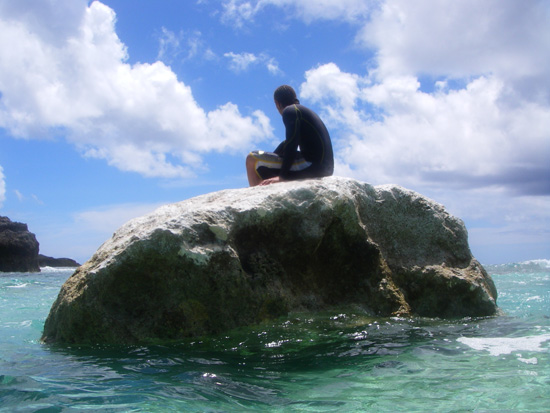